Kaleidoscope has given me the opportunity to act on a problem within health and care that has directly affected me. Stereotypes and assumptions about who has the right to be sick have a significant impact on the wellbeing of people who do not fit into neat boxes.

I’m an intern on Kaleidoscope’s new Perspectives Programme, which is focused on promoting unheard voices and diversifying health and social care through a bespoke creative project.

When I first heard about Kaleidoscope, I couldn’t help admiring the team’s drive to promote alternative points of view, and their inventive, thoughtful and collaborative approach to improving health and care. In my first few weeks here I’ve discovered that this is an organisation unlike any other I have worked for.

Before I applied for the internship I was living in what can only be melodramatically described as a post-university apocalypse, working several part-time jobs and generally freaking out about life.

From studying social anthropology, I had developed a desire to work in a job with a sense of value, justice and impact. However, this dream seemed pretty unachievable until my flatmate sent me the ad for the Perspectives Programme.

I immediately fell in love with Kaleidoscope’s message and applied for the role on the same day. The moral of the story is to listen to your friends. They often know you better than you know yourself.

Fellow Perspectives Programme member Farhath and I will be writing regularly about our time at Kaleidoscope over the coming months. The Programme enables us both to develop and lead on a project that promotes unheard voices in healthcare (while also helping with Kaleidoscope’s client delivery work).

My project aims to raise awareness of the unique pressures facing LGBTQ+ people with eating disorders, and to encourage health and social care organisations to invest more time and resources into doing the same. We’ll ask LGBTQ+ people to contribute to a multimedia zine about what it’s like to live with an eating disorder as a queer person. We will showcase these stories at a zine launch attended by our contributors, and healthcare and LGBTQ+ support groups.

Why is this project important?

In the UK, LGBTQ+ mental health is becoming an increasingly public issue promoted by health and LGBTQ+ organisations alike. It’s amazing that efforts are being made to promote and improve LGBTQ+ wellbeing, but certain aspects are yet to receive the attention they need.

Even though LGBTQ+ youth are at significantly higher risk of developing eating disorders than their heterosexual peers, related reports (like Stonewall’s report on LGBTQ+ wellbeing) usually contain only one or two sentences (if any) on the topic.

Kaleidoscope has given me the opportunity to act on a problem within health and care that has directly affected me. Stereotypes and assumptions about who has the right to be sick have a significant impact on the wellbeing of people who do not fit into neat boxes.

In eating disorder services and beyond, we need to centre the voices of the marginalised and engage an intersectional, dynamic and reflexive approach to health and social care. I am delighted to be part of a programme that is stoking the fire of a much bigger conversation. Stay tuned to see our projects come to life. 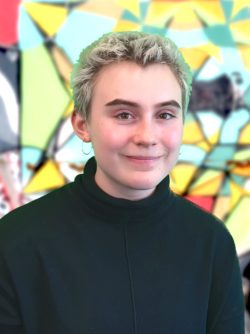