Childhood obesity: holding back the water

Addressing a complex problem such as childhood obesity needs a new way of thinking about what we’re trying to do, argues Rich Taunt, Pasha Elstak and Vincent Busch.

The scale of the problem is a ‘rising tide’. The majority of causes lie ‘upstream’, yet we spend more time ‘downstream’. Metaphor coincidence? Maybe. But thinking water can help us make a decisive breakthrough in how countries, cities, and organisations work out what they need to do to reduce obesity.

150 kilometres south of Salzburg, high in the Swiss Alps, sits the Kölnbrein Dam. 200 metres high, and 40 metres thick, the dam generates the same energy as half a million wind turbines. Behind its walls sits 82,000 Olympic swimming pools worth of water, drawn from over 100 kilometres around. It took eight years to build — yet had been in planning for more than 30, and didn’t run at full capacity for 10 more years due to cracks appearing in construction.

The sandbag is a more humble affair. Made out of scraps from textile manufacturers, each one costs 20p/€0.25 if you’re happy to fill it yourself. They’re a staple of responding to floods fast, having proved reliable defence for dikes and rivers up to six feet high. While engineers worldwide have perfected different techniques for their use (the US Army Corps of Engineers recommends pyramids), armed just with a spade and some sand, volunteers can do a pretty decent job too.

Which of these metaphors helps us think better about childhood obesity? The magnitude of the problem draws us inexorably to the dam. If we’re going to sort childhood obesity for the long term, we need to plan carefully and build something robust. Given all countries are struggling with this, we need solutions that can be effective across large areas. Obviously, a dam is precisely the sort of decisive intervention we need.

To solve childhood obesity we could spend many years perfecting the most beautiful system for cycle lanes, yet only to find that fears of crime meant they sat empty and unused.

Yet we’d be wrong. A dam is a great solution to a complicated problem. By no means simple, equipped with enough water engineering degrees (and a lot of concrete), we can fairly reliably know how and where to build dams and what will happen when we do.

There are very few easy to understand rules. It’s causes are manifold, and you can’t predict with any certainty how changing one part might affect another. Building an expensive dam to block one river doesn’t help much when there are 50 more surging through elsewhere. To solve childhood obesity we could spend many years perfecting the most beautiful system for cycle lanes, yet only to find that fears of crime meant they sat empty and unused.

Instead, we need sandbags. Layers of interventions placed one on top of another capable of being established and rearranged quickly as we learn more about the problem we’re facing. What matters is both the number of sandbags, but equally how they’re assembled. For childhood obesity, new cycle lanes are laid next to public safety improvements, next to cycling classes in schools, next to cycle car parks at work for parents. 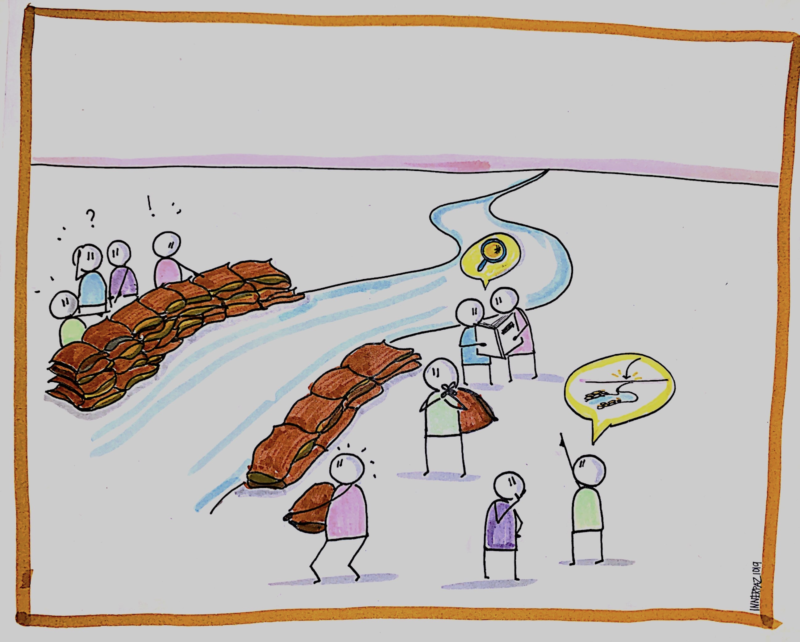 We write this from two sides of the North Sea. We have both used sandbags to describe the policy approach needed, Rich Taunt writing in London about sandbags in the context of national health policymaking, and Pasha Elstak drawing sandbag pictures in thinking about Amsterdam’s Healthy Weight Programme. (To complete our happy picture of European co-operation, we discovered this while in Austria attending the Salzburg Global Seminar, Halting the Childhood Obesity Epidemic: Identifying Decisive Interventions in Complex Systems.)

Another coincidence? Certainly. But we think this metaphor can play a critical role in helping those working to reduce childhood obesity frame what they need to do. Nor has it just been thought of now; sandbags being a metaphor used by David Katz in the US for some years.

Fighting against the way we normally think

Our brains are far more prone to thinking about simple or complicated problems than complex ones. We desperately want there to be decisive interventions we can use, beautiful dams we can build, which will fix our problems in a nice easy to understand way. As HL Mencken wrote, “for every complex problem there is an answer that is clear, simple, and wrong.”

Thinking in terms of sandbags gives us the framework to avoid that trap. More than anything it underlines three key approaches required to have a complex systems approach to childhood obesity.

First, the volume of interventions matter.

It’s simply not good enough to just think about physical activity, or food systems, or just the two together. In Amsterdam the third pillar of our approach is sleep. The evidence of its importance is clear (for example, from one study, infants who averaged fewer than 12 hours of sleep a day had twice the odds of being obese at age 3), yet most of our interventions to address it we have had to research and make up from scratch.

Second, we have to care as much about the joins as the interventions.

Complex systems laugh at silos. For our interventions to be effective we have to learn to work in a far more coordinated way, spotting gaps and perverse incentives, and fixing them quickly. It’s one reason why in Amsterdam we have merged all of our university public health research teams, and work in the same room as our policymaking colleagues.

Third, we need to evaluate the sum not the parts.

Asking about the impact of one individual sandbag is pretty pointless. Unless it has a big hole in it, it’s probably fine. What matters for childhood obesity and sandbags alike is the impact of all of the interventions working together in their particular context. This is far harder to do than picking a single intervention and going all RCT. But easy here is wrong. Instead, as Harry Rutter argues, we need a far more nuanced approach to how we even talk about impact and evidence when traditional methods come up short.

The tide of childhood obesity is rising. We do need to go more upstream. Both of these statements are true, yet we’ve been saying them for years with little sign of progress. We need a new perspective on an old problem: the humble sandbag.

This blog was written by Rich Taunt of Kaleidoscope Health and Care, Pasha Elstak and Vincent Busch of the Amsterdam Healthy Weight Programme.