One voice that I’ve heard since I joined Oxleas is that of a man I often see when I visit the Bracton Centre, a secure hospital that we run in Bexley. He is in his early 50s. His manner is guarded but friendly. He tends to avoid eye contact and looks into the distance when he speaks to me. His eyes look hurt and he has the look of someone who has experienced pain.

The Bracton is a specialist hospital providing forensic mental health care. Forensic mental health services offer assessment and treatment to people with a severe mental disorder who pose a risk to themselves or others. Most of these people have been convicted of a criminal offence.

Michael grew up in south east London. He had a difficult childhood – a strict upbringing with corporal punishment. His behaviour was difficult and he started smoking cannabis aged 10.

He truanted and was suspended for fighting. He came into regular contact with the police. The frightened 10-year old became an unemployed young man who used drugs and alcohol, and whose friends were involved in crime.

I asked Michael about his experiences growing up.

“I chose bad company. I wasn’t interested in work. The bigger boys told me that if you do this you’ll be out in a few years; you’ll still be a young man. If we rob someone, if we steal £100k we’ll be old men when we get out.”

Michael began to experience psychosis. Psychosis is a severe mental disorder in which your thoughts and emotions are so badly impaired that you lose contact with reality. It can include hallucinations, delusions, disorganised thinking and speech. A person experiencing psychosis is living in a world we cannot see or recognise as our own.

Michael committed a very serious offence while in the grip of his psychosis. He was arrested, remanded in custody, and his psychosis was such and his offence so grave that he was transferred to Broadmoor. He spent years in there and elsewhere in secure services before being transferred to the Bracton Centre 10 years ago. He has spent every night in a secure hospital since 1987.

Clinicians who work in secure mental health units face the reality of patients for whom the die is cast by the time they reach our services.

Our clinicians see patient after patient who share elements of Michael’s experience. They see the thread of childhood adversity, abuse, and a dysfunctional family; a lack of engagement with education, substance misuse, criminality and the onset of severe and enduring mental illness.

One of Michael’s doctors told me that the biggest difference between patients who have committed serious offences and those who have not is neither the diagnosis nor severity of their mental illness. It is, purely and simply, the barren hinterland of their childhood.

I asked Michael what might have made a difference to him or to children like him. He takes full responsibility for the choices he made and does not seek to deflect it. But he said: “Structure and support from an early age. Education. Job prospects when you leave school. Deterrents when you offend.”

Clinicians who work in secure mental health units face the reality of patients for whom the die is cast by the time they reach our services.

These clinicians strive to offer non-judgemental compassion; to offer a safe environment to people who have never experienced this before in their lives. For many patients, the security and care offered by these therapeutic relationships is something they have never previously experienced.

Michael told me about the impact of his care and treatment: “I have stopped hearing distorted voices. I know about right and wrong. I know how to understand empathy more. I know violence is a no go. I was possessed by evil; I didn’t know what was going on. I know that now. I had no idea what I was doing.”

Mental illness affects who we are at a fundamental, personal level. But mental wellbeing can only be maintained, and mental illness treated successfully, by supporting both clinical recovery and personal recovery. In a life with positive relationships, a decent place to live, with goals and with meaningful work.

Forensic patients are presented as a threat to the vulnerable, when they have often been – up until the point of the offence – the most vulnerable among us.

“If I’m still alive… I could be gardening. I could be plastering. I know picture framing, valeting cars. I know about work now and how to work up the ladder. I didn’t know any of that when I was a kid. Hard work is like medicine to me.”

After 8,000 nights in secure care, I asked Michael where he would go if he had a weekend to himself. The idea alarmed him. He told me he would go to his Mum’s in Lewisham. Then he would come back to the Bracton, which for now is his home.

He is preparing to move on to a less secure setting, but the challenge of leaving the one place where he has formed lasting relationships with people he trusts is daunting.

Michael was a 10-year old boy, smoking cannabis to help him come to terms with what was going on at home.

Michael was a 21-year old man committing a violent assault in the grip of psychosis.

Michael is a 53-year old man, with no prior adult life to return to – seeking instead to renew himself and live out his life in peace, using the tools he has learned within a secure hospital.

Voices like his, and those of the many clinicians who work in forensic mental health, are not often heard. Forensic services do incredible work, quietly and effectively, seeking to treat our very highest risk patients and offenders. They are not well-served by news stories and headline writers.

There are around 60 medium secure hospitals in England, with around 3,500 people living in them. Forensic patients are presented as a threat to the vulnerable, when they have often been – up until the point of the offence – the most vulnerable among us.

To see in that 53-year old man the 10-year old boy; to balance that against the lives he has destroyed; to offer care and compassion without judgement; that is part of our National Health Service.

I asked Michael about recovery – did it mean anything to him?

He said: “I do believe I have been wounded. I have hurt people. I have destroyed some people’s lives. I do believe I am recovered. I will close that wound. I will heal. I think I have a future. I haven’t given up. I am still alive. Life is precious.” 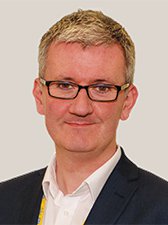